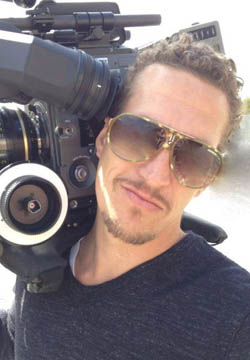 Spend a day on the set with William Summers and two things become apparent: his infectious energy and his love of creating images that tell stories.

William ‘Billy’ Summers discovered art and photography early in life. He developed a passion for images and lighting that were able to capture a unique perspective … one that told a story … that entertained … that inspired … that were groundbreaking to the eye of the beholder.

With over a decade of experience as a Director of Photography Billy’s work has been featured in global advertising campaigns the likes of Volvo, Converse, T-Mobile and Redstripe. He has been praised by leading directors in film and television with projects ranging in cinematic style from formal pictorial composition to vérité hand-held camerawork. With feature film, digital and documentary work under his belt, Billy has
welcomed the challenges of independent projects as much as larger commercial ones.

By way of his versatile nature and a great calming demeanor – a most welcome attribute by the Directors and actors on set, Summers varied collaborations have allowed for him to hone his craft into what is today – his own unique style of cinematography. This has earned him the respect of fellow artists and garnered him award-winning results. With the accolades he received he was also bestowed with great opportunity as only the third Director of Photography to receive the groundbreaking RED Epic. With close ties to its inventor, Jim Jannard, Billy was further thrown in the spotlight when he shot what would be the world’s first 4k 3D with the Paradise FX and RED #13.

For the last decade and a half William ‘Billy’ Summers has been exploring many outlets to his craft. With his viral-campaign work using new camera techniques and experimental equipment he has pushed the envelope as much as lead the charge into unchartered territory.

Of his many projects he has creatively directed and captured spots for Amazon Kindle Fire, Ford Trucks, T-Mobile and is currently prepping for a 3D action adventure feature shooting in Louisiana.

What’s next ? … as Gun4Hire’s Director of Media – the opportunity to create compelling stories in short – creative spots is a springboard to many other possibilities … the key is to stay cool – stay in touch – stay creative.